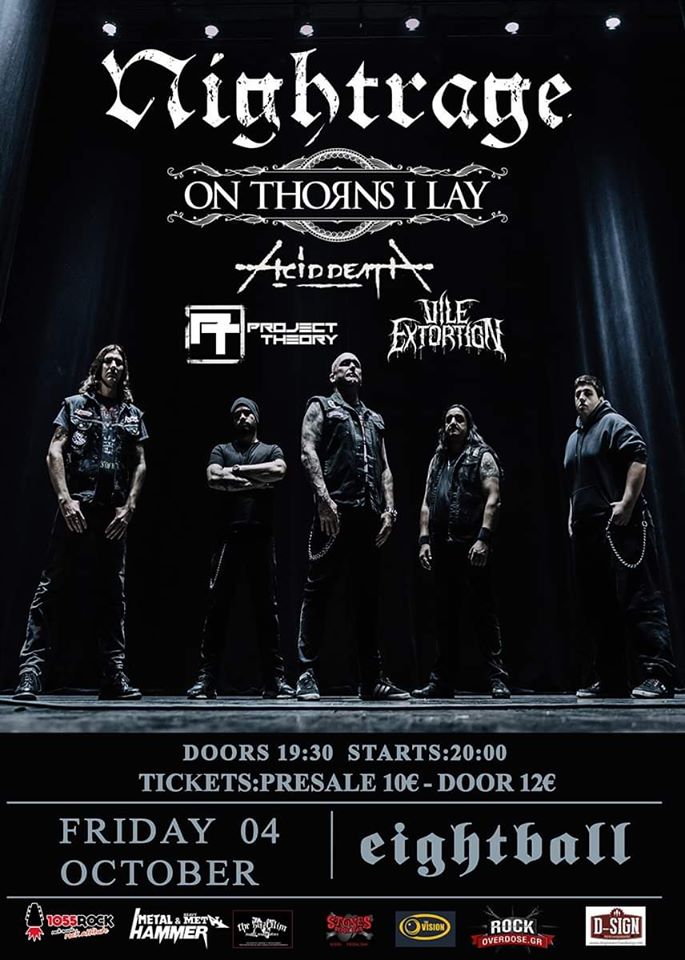 Nightrage is back playing at Thessaloniki at Eightball club, along with the kings of doom death On Thorns I Lay as co-headline act and also the masters of progressive death metal Acid Death.

a Latin quote that can be translated in to “Man is wolf to man”.

A line here depicting the predatorial bloodlust of man in the role of being its own greatest enemy.

But not only that!

Nightrage is back again with their eighth album ”Wolf To Man”. A furious mare ridden yet mesmerizing melodic musical journey, telling a story that guides us all the way to the inevitable demise of mankind. A delicate and well-balanced blend between brutality and melody. An intricate mix of furious thrashing riffs, airy instrumentals and hooking choruses to bang your fists to.

All this and still true to the melodic death metal path they set so many years ago.

The creative power trinity of Marios, Ronnie and Magnus started this conceptional dive into the darkest parts of humanity on the previous album and is now on “Wolf to Man” taking it to the next level.

This time the majority of the album recordings were made by the band themselves in their own studio. That way being able to put more effort than ever before into the guitar works, vocals and the overall concept of the album. And what a winning concept that was. And as that was not enough.

The sound of this disasterpiece is both crisp and brutal. Perfectly enhancing every aspect of this soundtrack to our extinction.

Now armed with savage thrashing songs like “By Darkness Drawn” and heavy groovy rockers like “The Damned” or the brutal title track leaving no ears unharmed, Nightrage is once again ready to take on the world.

This time reinforced with new blood in the ranks. Francisco Escalona – Bass and Dino George Stamoglou – Drums, former trusted touring musicians for the band that now earned their place as solid members alongside Marios, Magnus and Ronnie. A welcome addition that makes the NR family stronger than ever.

Come follow Nightrage on their journey through the dark destiny of humanity.

Man is wolf to man!

ON THORNS I LAY Bio:

On Thorns I Lay started as a death metal band, under the name of Paralysis in the early 90’s in Greece. Together with other cult bands such as Rotting Christ, Septic Flesh, Necromantia, Nightfall started to spread their name in the local and global underground scene.

In 1993 they changed their name to Phlebotomy and released the EP “Dawn Of Grief”. Next year they recorded the “Voluptuous” demo which draw attention of Holy Records (Fr).

In 1994, the band changed their name to “On Thorns I Lay” and released their first album which was closer to death/doom style. Through the years the band evolved their music to gothic metal.

They have released 7 albums and have played in Greece and in Europe together with great bands such as Dream Theater, In Flames, Anathema, Amorphis, Katatonia, Tiamat, The Gathering, Satyricon, Septic Flesh and many more.

The band after a hiatus of 14 years has just signed a contract with Alone recs / the Stone Circle Spain and The Vinyl Division. On March 12 they will release the 8th and most important album of their career recorded at Devasoundz studios (Rotting Christ, Septic Flesh), mixed and mastered by Legend Dan Swano at Unisound AB studio.

Their current music style is pure atmospheric doom death metal, back to the roots!

They were characterized by many as the most subversive, controversial and “heretical” Death Metal band that took the Greek scene until 2001. Recordings for them began when the word "discography" sounded very new to the Greek underground. Received numerous enthusiastic reviews from world press and a host of opponent arrows especially in their own home country.

ACID DEATH, is one of the oldest Greek bands that have been active for 12 years, from 1989 to 2001, started from classic Thrash Metal and ended up being the sole representatives (for many at a European level) of Progressive Death Metal up until their disband. Now the band is active again since 2011. Having the assets of an EP, a split LP, three full length CDs and countless live appearances at times where live gigs where worth their weight in gold, they played along with bands such as KREATOR, THE HAUNTED, IMPALED NAZARENE, CHILDREN OF BODOM, MAYHEM, ROTTING CHRIST, CORONER, PESTILENCE, SIX FEET UNDER, they have come full cycle and the years that followed only strengthened their name… Its members were found in other bands of the scene, giving good examples. The «Total Recall» of 2011, almost 10 years after its disband, found ACID DEATH with a revamped lineup, endless inspiration and above all the mood for a lot of hard work.

On June 1st 2012 the band released its 5th official release, “Eidolon” album, the 1st after its reunion. In 2015 ACID DEATH signed a 5-years contract with the German label 7hard/7us Media Group GmbH and the successful “Hall Of Mirrors” album saw the light of the day on September/2015. Two years later band’s “Balance Of Power 1992 – the lost album” released for 1st time on its original form after 25 years.

Project Theory is a 4-member ''Nu Metal/Metalcore'' band from Greece. Strong and aggressive riffs combined with melodic vocals and a powerful presence on stage, characterizes Project Theory in every live performance. Their new album "Blood And Loyalty" is almost ready and its gonna be released late in 2019. The album recorded and mixed at Valve Studios in Thessaloniki during the summer of 2018 by Stratos Karagiannidis(Gus g, W.A.N.T.E.D.) and mastered by Steve Nagasaki of Nagasaki Sound Studios.
Project Theory appeared in countless venues in various locations of Greece, since the creation of the band. Their debut album titled ''Something Between Us'' that released via Sliptrick Records based in the United States achieved top 16 in the 2016 best rock album charts of the Balkan region.

Vile Extortion is a thrash metal band from Thessaloniki formed on June 27, 2017. On March 4, 2018 they performed for the first time live at the "Battle Of The Bands" local contest, where they finished in second place and won a 3-year contract with New Dream Records. Their debut EP, "Incoming Threat", was released on May 12, 2019. So far, the band has opened for bands such as Inhuman Rage, Chronoshpere and Rumble Militia. As of August 2019, they are in the final stages of composing their debut album.