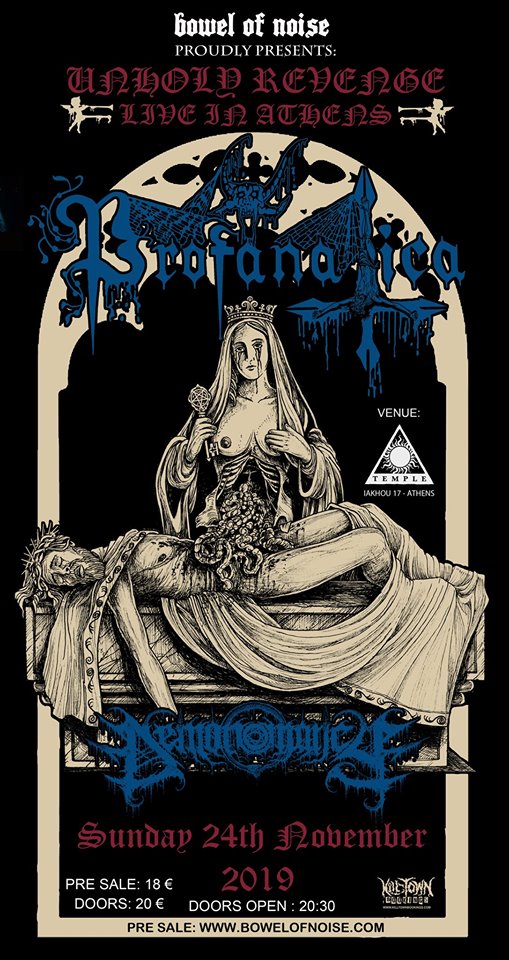 Profanatica will have a new album out in October 2019 and will be touring to promote it with backing from their new label Season of Mist.

As support they are bringing with the great Demonomancy from Italy signed to Invictus Productions.

Together this package will arrive in Athens , Sunday - 24th Nov. 2019, so don’t miss out on the obscenities of the Unholy Revenge!

PROFANATICA (us)
Forever the iconoclasts, PROFANATICA are both black metal legends and defiant of such concepts of "legendary." As one of earliest American black metal bands, during the dark 'n' bloody days of the early 1990s, PROFANATICA set out upon a course of utter blasphemy and barbaric primitivism, then retreated into the shadows as a cult icon, only to be resurrected years later once the black metal scene had finally caught up with their invention/degradation. When they returned, with Profanatitas de Domonatia in 2007, the signature PROFANATICA sound was firmly in place, and yet masters Paul Ledney and John Gelso continued to challenge themselves and push this pulsing primitivism to uncharted waters of sin 'n' sickness. Three years later, Disgusting Blasphemies Against God pushed the envelope even further, and yet three more years again, 2013's Thy Kingdom Cum climaxed all over that envelope. Now, with The Curling Flame of Blasphemy, PROFANATICA have gone back to the beginning while re-imagining their signature sound in the subtlest and yet somehow-most-powerful way.

Arguably the band's crudest and most primitive full-length thus far, The Curling Flame of Blasphemy bulldozes into being with a crushing, blown-out explosion of sound, setting out PROFANATICA's stall and drawing a very firm line in the sand: you either submit to its gloriously hypnotic blasphemy or get trampled under cloven, obsidian hoof. Paul Ledney's idiosyncratic approach to rudimentary/elevated-mind drumming forms the backbone by which John Gelso sends out wave upon wave of tense, vertigo-inducing riff, layering the bulldoze with chilling counterpoint that sends the vertigo into overdrive and creates a perverse disconnect from the sonic wreckage going on all around them. All the while, Ledney's charred-black vomits cut through the crush to spill forth verbal desecration, profaning the pure and defiling dog's creation as only he can. Together, both masterminds behind PROFANATICA underline an already incontrovertible fact: despite a decade or two of the black metal scene pilfering from them, no one sounds like PROFANATICA. Thus, The Curling Flame of Blasphemy never dies, never relents - from a flicker into an inferno - and both its heat and light shall serve as a guide for future generations of devotees/descecrators.

For a decade now, Demonomancy have been steadfast pillars of the bestial metal idiom, perfecting it over the course of two EPs and 2013's definitive debut album, Throne of Demonic Proselytism. However, whilst working with the same strident fundaments - ancient South American black/death, the rigorous Blasphemy/Beherit axiom, early proponents of metal primitivism like Profanatica and VON - hereby with Poisoned Atonement do the power-trio leave behind all pretenders and stake out a new, defiant claim of sulfurous metal magick.

Portended by the ominous new track on the 2016 split with Finnish comrades Witchcraft, Poisoned Atonement portrays a Demonomancy no longer bounded by subgenre dictates. Here, they explore all the craggiest corners of their songwriting acumen, finessing forth an endlessly burly yet richly dynamic soundfield that verily approximates the most mysterious echoes of the grand abyss. Smothering, mind-melting violence collides head on with vortextural ritualism, wild-child heavy metal abandon with austere, locked-in grind: Demonomancy not so much leave no stone unturned as they do simply CRUSH it into feeble dust under their massive, ever-masterful boots. To begin understanding the multi-layered miasma of Poisoned Atonement is to gaze deeply into its cover art...

As such, Demonomancy is the sublimation of primitive human impulses morphed into aural spears that suffocate consciousness in a perennial leprous embrace. Corrosive verses burn superficial organic tissues, revealing the pulsating flesh exposed in its primordial obscenity. In this atoning pilgrimage, the unbearable guilt gives birth to inner demons that lacerate the mendacious drape covering our hidden and irrational world. "We praise the morbid and forbidden Bestiality to be rejoined with our primeval dimension," state the band. "We praise the diseased and torbid Spirit bounded by the mortal coil’s festering chains. The body is merely a monumental epitaph. Metal of Death – Methodical Chaos."

"with Poisoned Atonement, Demonomancy will come to stand head and mighty horns above their peers. " Decibel Magazine

"They know how to conjure up moments of all-out demonic warfare, but they never leave their sense of morbid melody too far behind. " CVLT Nation

"Here we have us a delightful descent into The Devil's den, down there where death and despair dominate the domain and darkness descends upon the diabolical. " Via Omega

"Poisoned Atonement is an incredible album. If you are looking for something hard hitting that still has some melody and a bit of atmosphere with pure Metal roots, this is that album. " Metal Temple