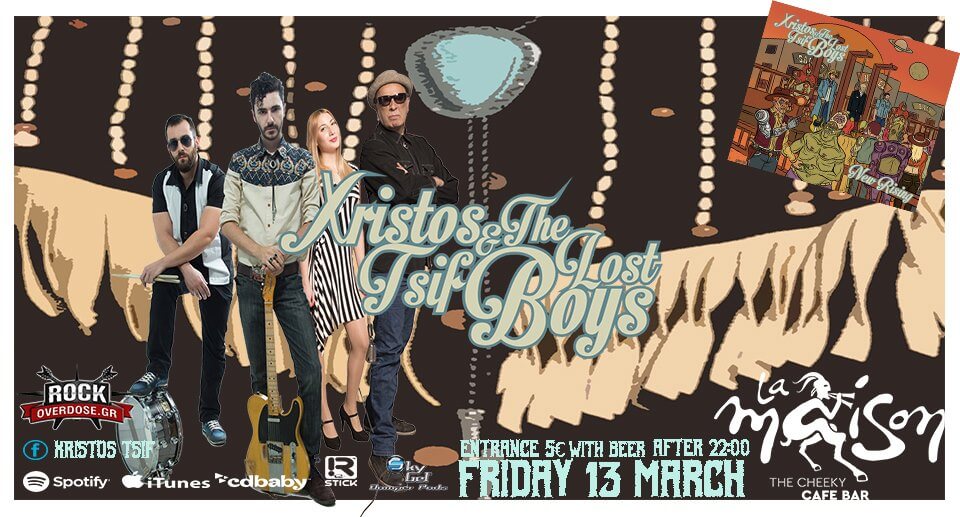 Xristos Tsif is an Greek guitarist singer and songwriter who was born in Thessaloniki Jan 1988.Tsif started playing at the age of nine his first classic guitar. A Christmas gift from his mother. His Birth name is Xristos Tsifoutis. From early age he sang in school choirs and as a teen artist he was singing and playing Greek music with some old school friends in many places around his town. Xristos Tsif is a self-taught guitarist. He was trying to get any knowledge from some of his old school friends who went to music school. He didn’t realize his passion for the instrument until at the age of twelve. He bought his first electric guitar and his first amp from an old guitar store in Thessaloniki.

Xristos was drawn to the rock bars of his town and watched great bands and musicians doing what they loved and he was hooked. It was not long until he made his first steps between them. In 2009 Tsif made the Lost Boys with some close friends from his village
& his high school. Started writing his own songs thus discovering his secret talent “the Songwriting”. In 2010 bought an American butterscotch Fender Telecaster 52’ , serial number 73382, nicknamed “Loo” because of his strong influence from blues country players such as Danny Gatton, Roy Buchanan, Vince Gill. Many years Tsif played his music all around the country many times in many bars, bike clubs & festivals as he have been toured European Festivals (UK,Poland,Bulgaria,Skopje etc) with many outlaws where he called “The Lost Boys”. There was amazing talents among the lost boys such a good artist and musicians. In 2015 the passion for the guitar tone make him search the Nashville players and then he fell in love with that kind of music style. He practicing every day many hours with strong passion. He learned many licks from his legends which helped him with many of the technical aspects of his playing and now he Ιs the first newborn modern country guitarist in Greece and express his emotions through his songs.