Fredrik Nordström on RockOverdose:”I prefer to work with music in mind,that’s the most satisfying thing to do!”

RockOverdose.gr and Zisis Petkanas had the honor to chat with Fredrik Nordström, one of the leading melodic death metal and power metal producers in Sweden, who has worked with with some of the most famous bands of the said genres' top acts like In Flames, At The Gates, Dream Evil, Dark Tranquillity, ARCHITECTS etc,  considered to be one of the top metal producers in Europe, and one of the central figures of the "Gothenburg style". He is also the guitarist of heavy metal band Dream Evil.

Let's read what he has to say about the situation in the music industry this tough period and also some interesting stories from the past and of course  his plans for the future!

You may also listen to the chat, below:

Fredrik Nordström:  Hi! Thank you! Wish the same to you!

RockOverdose: How would you comment on the situation of the music industry during the current period with the lockdown due to the covid-19 pandemic?

Fredrik Nordström:  It sucks! We have many people lost.

RockOverdose: Did it affect your plans and work and what's your experience?

Fredrik Nordström:  Personally I normally work mostly with international bands, I’ve been in the studio recording for months and then everything was cancelled. Even in Sweden, I don’t think it is necessary to do all these staff because of this flu.

RockOverdose: How do you see the future from now on in the music industry and in general?

Fredrik Nordström:  I think it’s going to take a lot of time. In Sweden it’s a bit weird, e.g. if you have a restaurant with 50 people is allowed, but if there’s a guy with a guitar playing is not allowed!  I feel sorry for the people who have music as a living. I don’t know if we will be lucky to have live concerts during this year … There are a lot of conspiracy theories; I don’t know what to believe.

RockOverdose: How and in which way, has the music production changed during all that years? Do you prefer the analog or digital era, and why?

FredrikNordstrom: It was good back in the days when we used analog tape recorders and staff like that, but the producer and everybody had to be very preside of what’s going on. With the digital staff is easier, very convenient and I wouldn’t go back if you ask me. I should stay with the staff I have.

RockOverdose:  Let's go back in the late 80's - early 90's, when you did your first productions, did you expect your studio to be the born place of the "famous Gothenburg Sound’, one of the most influential music scenes? Why and how you believe that happened?

Fredrik Nordström: No, I didn’t expect that! I was actually working with pop musicians. All the famous Swedish pop producers are old, middle aged ex-metal guys. I did the opposite; I went from pop music to metal music. Actually, I started the studio to record my own staff, that was the plan at the beginning and suddenly I was fully booked with work.

RockOverdose:  Do you prefer working more as a producer or as a musician?

Fredrik Nordström: That’s a hard one. I think I prefer to work with music, if that’s an answer.  When you work with music in mind, that’s the most satisfying thing to do, also you get satisfaction with the outplay, meeting fans, people that appreciate your music, that’s a very good gift.

RockOverdose:  What music means to you? Metal music for example…

Fredrik Nordström: I’m not that guy who says I like that music and I don’t like the other. For me metal music, doesn’t need to be the best music always. I like listen to music, it doesn’t matter what kind of music it is, and for example I’m a big fan of ABBA, I like their staff. For example, eight years ago, when we made the ARCHITECTS album, the guys asked me what’s my opinion, and I really liked it, I can put it in my car and listen it because is good music!

RockOverdose:  There are so many bands that you've worked with, it's really an amazing catalog. Would you like to share withus, any backstage moments that their story worth mentioning? Any funny moment or hard for you, that you stillremember ... it would be interesting.

Fredrik Nordström: Where should I start! Normally, when we’re in the studio we’re working, there’re not that crazy moments, to be honest. I remember one day that a guy spread in the whole kitchen with snuff; in Sweden we have that kind of tobacco, but he apologized, he said sorry. To be honest metal people are very kind and gentle, I can’t imagine how it would be if I worked with hip hop people. I’ve such neighbors and I’ve seen what’s happening there many times.

RockOverdose:  Has your rich experience so far, as a producer and musician, helped you predict or feel somehow, if an album or band would have success and durability?

Fredrik Nordström: Yeah! For example, BRING ME THE HORIZON, they were not a big band really but when I heard their first album I felt it’s going to be good, and when I saw the likes they had on myspace and I did their second album with them, I knew it’s going to be a big thing, I told them that they have to be professional from now on, take care of their staff because they were going to be a big band. And they became a big band! Actually when we did the fist ARCHITECTS album I was watching them here in Gothenburg as a support band. After recording their 5th or 6th album I said that if this album doesn’t have big success I will quit my studio work!  And it did success! But for example, HAMMERFALL, the first album I did with them they wanted to print 30000 copies and I was thinking to myself who’s going to buy these albums, because that kind of heavy metal it was so dead by then! But it was explode! Their show here was sold out and you could see so many young people screaming, that’s amazing!  A whole new generation starts listening to heavy metal music thanks to HAMMERFALL actually! They had also as a guest artist, UDO from ACCEPT and when he get on stage 90% of the audience didn’t have a clue who that guy was, that was very fun!

RockOverdose:  What about your band Dream Evil? Any news or plans for the future?

Fredrik Nordström: We’ve been planning to write a new album for almost two years now. We try to write new songs but with no success so far due to lack of free time. I think we have a very good back catalog with songs; the idea is to try and go back to our first album, to be more childish - if you understand what I mean. It’s super nice to be out and play in festivals etc but we had to cancel many shows because of that covid shit! As we don’t play so much, that’s the whole plan, we are really good friends, the band is like a hobby, instead of being a tour band, we prefer to have fun with the band and not to rely on the band for a living.

RockOverdose:   What about the cover you did on Helena Paparizou song “My number One”?  Would you like to tell us the story behind?

Fredrik Nordström: Actually our first drummer Snowy Shaw played the same tune and when his girlfriend heard it she recognized it was Helena Paparizou. He thought he made the tune but actually it was already a song like that! We recorded that cover song couple of weeks after she won the EUROVISION. It has a great tune. The label didn’t want to release the song as a single for some reason; they needed an album so 2 years later we had an album. I’ve never met Helena, she lived in Stockholm, and she’s quite famous here. 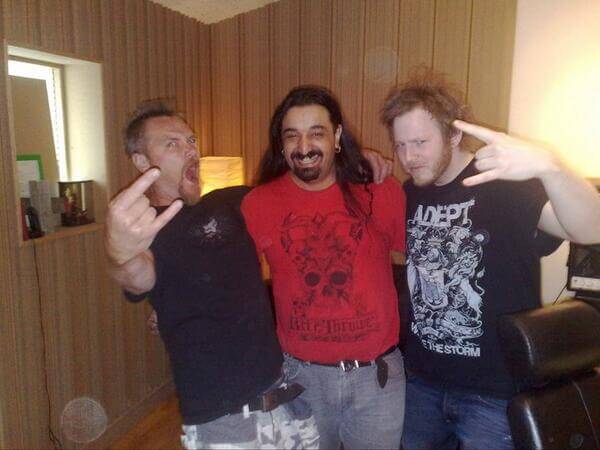 RockOverdose:   We know that you have strong bonds with Greece (Gus G., Marios Iliopoulos etc).Any plans working with greek bands in the future?

Fredrik Nordström: I hope Marios (Iliopoulos-Nightrage) will come back to work with us. It was very fun working with those guys. Marios lived in Sweden for many years but he was very stressed out back then, however now he’s a nice cool guy. I sent him my greetings!

Fredrik Nordström:  There are a lot of albums that have reached e.g. 20years anniversary etc, so I’m finishing now an Australian band, also we have remixed and remastered HAMMERFALL’s “Renegate” album, which is a very good album by the way. We’re going to re-do DIMMU BORGIR “Puritanical…” album. There’s a lot of staff going actually but also due to covid people can’t travel etc. I hope in March or April OBSCURA can be able to enter the studio, but I don’t know if this is going to happen…

RockOverdose: Which is the most proud moment for you as a producer?

Fredrik Nordström:  As a producer three times I’ve won the “best producer” in Japans BURN magazine! It’s a massive magazine for music in Japan, it has 70,000 readers. I feel much honored about that! And I think it’s like very big job I did it was with DIMMU BORGIR “Death Armageddon”, it was a massive recording, it took us 10 weeks we had orchestra, it was a great moment. Also with SPIRITUAL BEGGARS and their album “Ad Astra”, it was a very nice recording also!

RockOverdose:  Would you like to send a message to our readers?

Fredrik Nordström: I hope everything is going to turn back to normal soon. We have to be a bit more patient, I’m sorry to say. Everybody is so fed up with this!

Thank you very much!