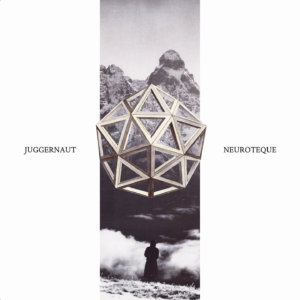 Continuing their exceptional work after their impressive second album “TRAMA!” , the Italian quartet Juggernaut keep on winning the impressions with their new album. “Neuroteque” is a musical masterpiece that manages to tell its story without using vocals at all !

I have to admit that I was not particularly familiar with Juggernaut. So , when I read that (according to them) they play “cinematic sludge / instrumental post hardcore” I felt confused and I didn’t know what the hell should I expect ! Well , the term “cinematic” is possibly the most accurate term they could use to describe their music. I would dare to liken the album with a TV show where each and every song is a single independent story with its own “script”. Below you will find the tracklist and a few more words on “Neuroteque” ;

Song durations are between 5’ and 7’ long each , so we are talking about an album with total runtime around 40’. Forty minutes of a musical super show! Melodies are succeeding one another in perfect harmony, one moment you’re listening to a jazzy tune, suddenly it turns to metal with many progressive elements to it and then it transforms into something which reminds of bossa nova ! A sign of the exceptional and really high musical skill and taste of the four members that consist Juggernaut.

As far as the theme of the album is concerned , “Neuroteque” (always according to the band) “is a place where everything is possible and everything can turn into something else” . Through their music , their melodies and the constant changes in style and texture throughout the album but also throughout each song separately , Juggernaut manage to create and form images which sometimes are psychedelic , other times are horrific or sci-fi and even bucolic at times !

The third album of Juggernaut is nothing more than 7 independent stories that are tied together in perfect harmony ,creating this unique musical trip that leads to the “Neuroteque”. Unique and authentic , the Italians surely deserve a lot more recognition and fame and what a better way to find them out other than their latest album ? “Neuroteque” will be out on the 11th of October so be sure to check it out !