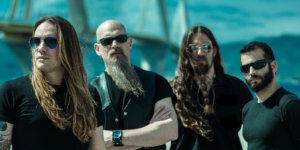 SixForNine is a particular kind of band, the kind that even though they have been present for many years, they have released only one album in 2015, their self-titled, and four years later, the time has come for their second, "Parallel Universe".

For the record, SixForNine started in 2011, as a project by George Kalavrezos, Iraklis Bouziotis and Petros Tsamparlis. With the addition of Fotis Benardo (ex Septic Flesh) as a vocalist, the quartet was complete and recordings started, with their debut album being released in 2015.

This first release seemed to do well with the audience and surely this played an important role in having a large part of that audience sticking around in anticipation of their next musical move. At last, we have reached 2019, where the band, after approximately a year of recordings, emerges to present "Parallel Universe", which consists of 9 tracks, 2 of which you can find on YouTube.

Musically speaking, the band sticks to their original style, with the only addition of even more progressive elements in their playing, resulting in their compositions acquiring bigger interest. Fotis's vocals is far better than their first release, much more practiced and the addition of the backing vocals, the final product sounds much more elevated and is tied perfectly with the total of those nine tracks. Much attention should be paid to the guitar parts as well, since George appears to have improved even more both as a composer and guitarist. Brilliant riffs which impeccably complement Iraklis's bass playing and come to complete Petros's excellent drumming.

So, nine lengthy tracks that are not at all tiring, since the quartet doesn't leave any space for that, both compositionally and with the perfect production, concluding in an album that attracts the listener from the first note.

"Parallel Universe" is an album that is obviously worth the four-year anticipation, without this being an indicator that every move for the band should have this big of a gap between them. Fresh sounds, truly impeccable performances that were recorded in devasoundz studios. Production was done by Fotis Benardo, mixing by Paul Pavao (Disturbed, Stone Temple Pilots, Breaking Benjamin) and mastering by Tom Baker (Rob Zombie, Nine Inch Nails, Motley Crue).

In conclusion, "Parallel Universe" is easily one of the best releases for 2019 and can as easily be an album to slide in any playlist with 9 excellent compositions that continue where their debut self-titled album stopped. In "Parallel Universe", Fates Warning meet Three Days Grace and the result is exactly what we expect.

Personally, some favourite moments are "Bullet off Its Course", "More than Words Can Say", "Counting Stars (A Parallel Universe)".

The album is out on the 2nd of August from Eclipse Records and the tracklist goes like this: