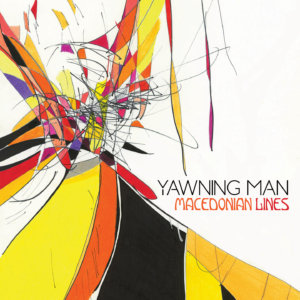 Almost a year after the release of their latest work, the “The Revolt Against Tired Noises”, the titans of stoner/desert rock from California strike back with “Macedonian Lines”. Truth is it is not very common for Yawning Man to release studio albums in such short time periods , especially since they formed in the distant 1986 but their first release (the legendary “Rock Formations”) was in 2005 and have since released in total 6 albums, including their latest one. Despite the fact we had to wait 19 whole years to get our hands on the first studio work by Yawning Man, they did play a very important role in the creation and development of the desert rock scene which was being born at that time in Palm Desert, California. It was from Palm Desert that the legends of stoner Kyuss started their short career and were heavily influenced by Yawning Man covering their song “Catamaran” . Brant Bjork, drummer of Kyuss, stated back in 2002 that “Yawning Man was the sickest desert band of all time. Oh, they’re the GREATEST band I’ve ever seen.”.

So, “Macedonian Lines” was a really welcome surprise since the band’s sound remains unique and easily recognizable without being identical with any of their previous records. This acts as proof that despite their 33 years of existence and continuous playing, Yawning Man keep on experimenting, evolving and exploring new paths in psychedelic stoner/desert/post-rock scene. Of course, how could a Yawning Man record exist without the heavy, punchy, fuzzy and groovy basslines by Mario Lalli, which many times steal the show in songs? Spoiler: It could not! It is worth mentioning that in all songs except for “Macedonian Lines” it’s the bass that sets the tone. In addition, the out-of-this-world trippy and dark guitar melodies and riffs by Gary Arce could not be absent and the powerful yet rhythmic drum patterns by Bill Stinson blend in in perfect harmony with the rest of the band, creating an amazing atmosphere.

It’s a fact that in “Macedonian Lines”, Yawning Man sound more mature and their music is clearly darker, heavier and more mysterious. The fact that the recordings of the song were done under live performance and the wonderful desert that surrounds the Gatos Trail Studio in Joshua Tree, California ,definitely added a lot towards that direction. The desert is an unlimited source of inspiration and you can almost feel the warm breeze blowing in all of the 6 songs of the album. The most important thing of them all is that Yawning Man keep on exploring new paths in their music and always provide us with new and fresh tones every time. Maybe “Macedonian Lines” is not their best record so far but it definitely is a “gem of the desert”.