ATTICK DEMONS on Rock Overdose: ” It is impossible to not think about Dickinson when we hear our singer”

We are very happy to present you are interview that Attick Demons gave to Rock Overdose and Sotirelis Konstantinos. The band talked about their upcoming album, "Let's Raise Hell", the difficultied that they faced up all these years and their singer's similar voice with Bruce Dickinson. Enjoy!

Attick Demons: Hi dear friends. It´s great to hear from you. We are feeling fine, thanks. We are really happy with all the feedback we are having from all over the world about our new record “Let´s Raise Hell”.

Rock Overdose: How it’s going on the band’s field these days?

Attick Demons: We are preparing the release parties and all the promotion. The new arrangements are sounding great, since we got back to the five-piece line-up after the Hugo Monteiro (guitar) departure. Our new drummer (Ricardo Oliveira) fitted really well and he seems to be with us since the beginning.

Rock Overdose: Your new album, "Let's Raise Hell" is ready to be released on 12th August. So, how do you feel?

Attick Demons: We couldn´t feel more confidence. It´s great to see that this album is out there. It was a mix of fun and hard work.

Rock Overdose: What should we expect to listen on this new record?

Attick Demons: It´s different for sure. Personally I think it is harder in some way, but we could introduce some progressive atmospheres now. 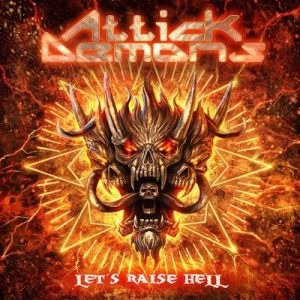 Rock Overdose: Are there any surprises or guests on the album?

Attick Demons: This time, the special guests are Juan Zagalaz from the Spanish band “Alhándal”. He created an amazing vibe that transport us to the 1001 nights in the intro of the Arabic oriented song “Dark Angel”, where he plays flute, Arab lute, mandolin, Spanish guitar, percussion and synthesizers and the fantastic guitarist Chris Caffery, best known for his work as a member of the mighty Savatage and the Trans-Siberian Orchestra. He did an astonishing guitar solo in the “Let´s Raise Hell” track. Ricardo Pombo (Cruz De Ferro), Leonel Silva (Mindfeeder) and Paulo Basilio (Deserto) – did the choir at "Let´s Raise Hell". Nero Victor – did a narration at “Endless Game", a fantastic work, I must say. And we had Liliana from Inner Blast that lent us her sweet voice in the “Dark Angel”.

Rock Overdose: This year is the band’s 20th anniversary. How do you feel?

Attick Demons: Tired but happy (laughs). We are ready for more 20 years.

Rock Overdose:  Despite the fact that the band counts 20 years, your first full length album came out just 5 years ago, and now we are waiting for the second. Why did you have to wait for 15 years so as to release a full length album?

Rock Overdose: After so many years of experience, how do you see the future of Attick Demons?

Attick Demons: You know, in these 20 years we had lots of highs and lows, but that´s not exclusive from our band. Sometimes we think that we are too tired to deal with not-so-honest people and to deal with some problems that makes us think that enough is enough,  but then we are back with the double of the strength, so, I see the future really bright. The new team is The team.

Rock Overdose: What are the difficulties that you faced up during the composing and the recordings of the album?

Attick Demons: The hardest problem is to make sure that the last song we composed is good enough to fit in our record. We don´t have fillers in our works, if it doesn´t sound great to us, we just forget that one and carry on for the next.

Rock Overdose: Artur Almeida’s voice is definitely like Dickinson’s. How does it feel to have such a great voice in the band?

Attick Demons: We are proudly a Classic Heavy Metal band. We are highly influenced by the NWOBHM. Please don´t get me wrong but people says that we sound like Iron Maiden, (which in fact is my favourite band of all time), mostly because our fantastic singer´s tone, it is impossible to not think about Bruce when we hear him, but it´s his natural voice tone and there´s nothing we can do. I believe that 80% of the singers would love to sound like him.

Rock Overdose: Do you have any touring plans so as to promote the new album?

Rock Overdose: Do you think that you will be able to visit Greece for some shows?

Attick Demons: I really hope so. I just hear some great stories from friends that played in Greece and it´s fantastic. I´m really curious about it (laughs).

Rock Overdose: Thank you very much for this interview. The last words are yours.

Attick Demons: We thank you so much for the support through the years and we really hope you enjoy our new record and we wish to meet you on the road very soon. Stay Heavy and Let´s Raise Hell. 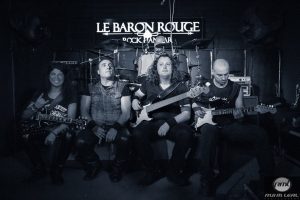