Helmuth Lehner (BELPHEGOR) on Rock Overdose: “Everything sounds even more brutal & possessed in our new album”

Belphegor's new album, "Totenritual" is coming in a few days and we are really excited for the talk we had with the band's leader and founder, Helmuth Lehner. Helmuth talked to Rock Overdose and to Konstantinos Sotirelis about the band's new album and the artwork, the upcoming tour and many more. Enjoy!

Rock Overdose:  How it’s going on the band’s side these days?

Helmuth Lehner: All good here! We're busy as always and just returned from the last two open air ceremonies. It was a mighty Summer season as we played ca 15 open airs and glorified our chaos but precise trademark sound for over 60.000 metalheads this summer. It left an impression and was a pleasure. A live situation is the essence of BELPHEGOR. Nothing is better than to melt together with the audience and celebrate this vicious – aggressive soundwall with them. Hail

Rock Overdose: You are going to release your eleventh album, “Totenritual” in September. How do you feel?

Helmuth Lehner: It's amazing!  I am so exceedingly proud of this album and I cannot wait for this monster to be unleashed. I'm foremost a musician and still try to get better and to develop with the band, with our sound, everything. This is the strongest recording line-up we have ever had and I guess you can hear it. Every element as well as the big picture of sound as a whole is very dynamic and intense and we added a lot technical parts, so we could bring all to the next level of extremities and try new arrangements/ parts. Everything sounds even more brutal and possessed than before, exactly as we wanted to. 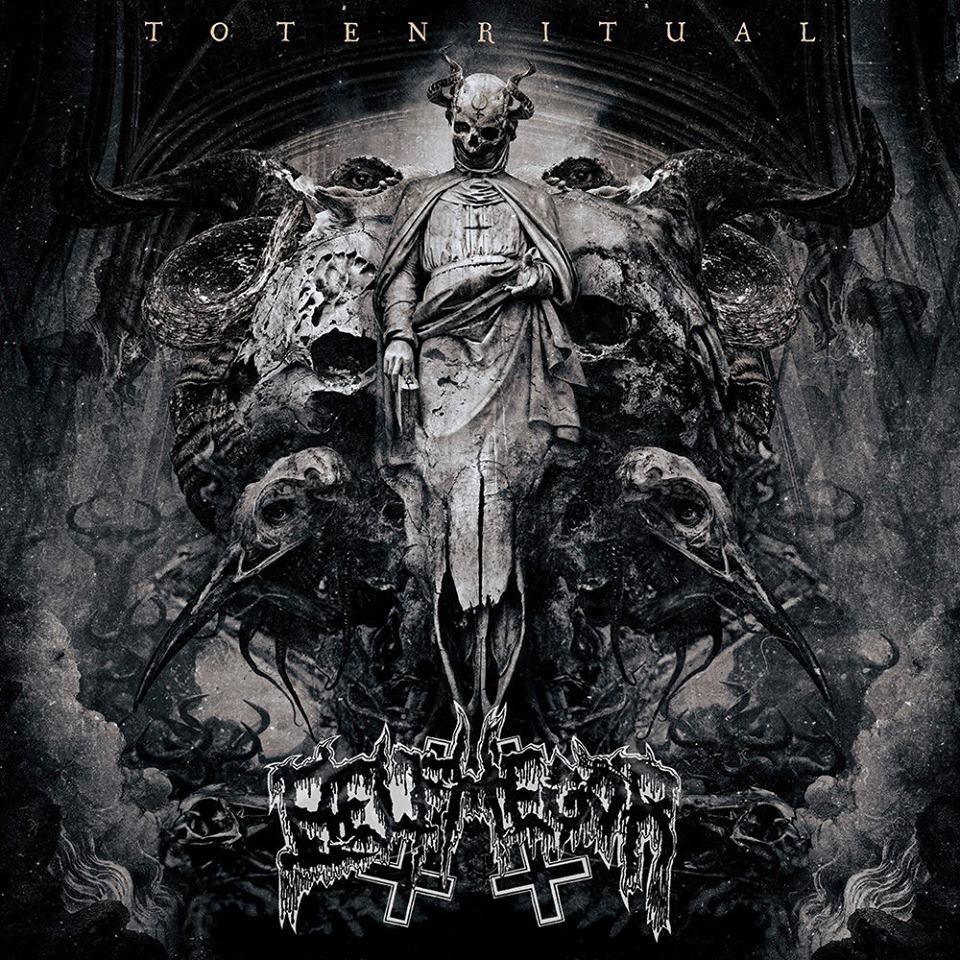 Rock Overdose: What should we expect to hear on this new album and what will the differences be from the “Conjuring the Dead” album?

Helmuth Lehner: First off, I don’t like to compare albums. Each time we try to bring the best out of ourselves, sometimes it works, sometimes we fail. It's about making your visions come true and develop, to overcome things, that what keep a band fresh excited, inspired and to see it all as a challenge. We turned the guitars even more down to reach a new low-end tone, so that’s the first thing that is different and the ritualistic atmosphere and brutality that comes with it and  is consistent throughout “TOTENRITUAL”. Also added a lot of new arrangements to our compositions.

We never stuck to a particular formula and we always try working with new studios, new producers, etc, to keep the fire burning. I hate stagnation. Our new German drummer Bloodhammer is a machine, with him in the fold we were able to improve as a band and as musicians. We also added new details to our music, some songs you need to hear four or five times to discover all we've put into them. „TOTENRITUAL“ is our most vicious album yet. Listen to it and you know what I'm talking about.

Rock Overdose: A month ago you released your first single, called “Baphomet” and I have to say that it’s very brutal and killer. What’s the feedback so far from the press and the fans?

Helmuth Lehner: "TOTENRITUAL“ is the perfect representation of  BELPHEGOR in an even more intense and possessed incarnation. BAPHOMET is probably the best example of how we wanted to sound anno 2017. Also, the soundwall is just brilliant and impressive, forged in Florida/ Usa by Jason Suecof and Mark Lewis in Audiohammer studios. Feedback is amazing so far, most dig it which is highly appreciated in the BELPHEGOR camp, some hate it, some are offended, also fine by me. It's their loss - not mine you know. Hail Metal! Hail Death! 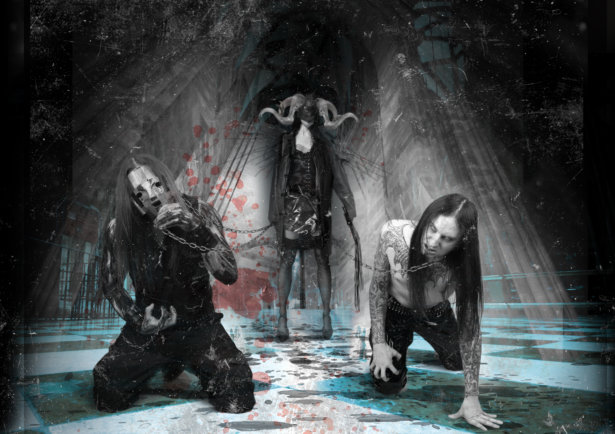 Rock Overdose:  After 10 albums, is it easy for you to write something new and interesting?

Helmuth Lehner: Yes it is. I am very passionate about everything I do, if I don’t like it I won't do it.  That’s how I operate and what I'm doing with BELPHEGOR. There is a lot of shit going on in this world currently and that always makes for good inspiration for art and music. Religion is still the base of political power in most countries, and as long as there are sheep, there will be corrupted tyrants’ intent on leading them. Religion is the most efficient way to control and mold a large number of humans, so I do not see true freedom of expression happening anywhere in the world anytime soon. Some countries are just more brainwashed than others.

I bring a a lot of sacrifices all the time, but at the end when I have the album in my hands I know why I went through all this and it's worth it. Or we do a great Ritual show and that also give me back a lot of energy, inspiration and magic to march on and on.

I'm interested in a lot things,..but yeah BELPHEGOR, playing guitar, to travel the world, and Music in general are my number one passions.

Rock Overdose: The “Conjuring the Dead” album was your most successful album, taking very good places at the charts. How did you feel about this? Does this makes you anxious about the new album, or you don’t care about the numbers?

Helmuth Lehner: I am always excited and see it all as a challenge you know. For me it isn't about numbers. For our company it is of course lets say important. If people don't support us and don't buy the new album we can't release LP´s anymore or the label won't give us a recording budget. For me it's about people that respect and understand what we are about with BELPHEGOR, I mean we have been here for 24 years and stronger than ever before and that's still unreal to me to survive that long and we are nowadays one of the unrelentless acts that tour the world while refusing all trends. We saw a lot hypes come and go last 2 decades, we are still here to destroy everything in a live situation, on stage is the place that counts, and you cant mess with us. Musickwise BELPHEGOR is TNT!! 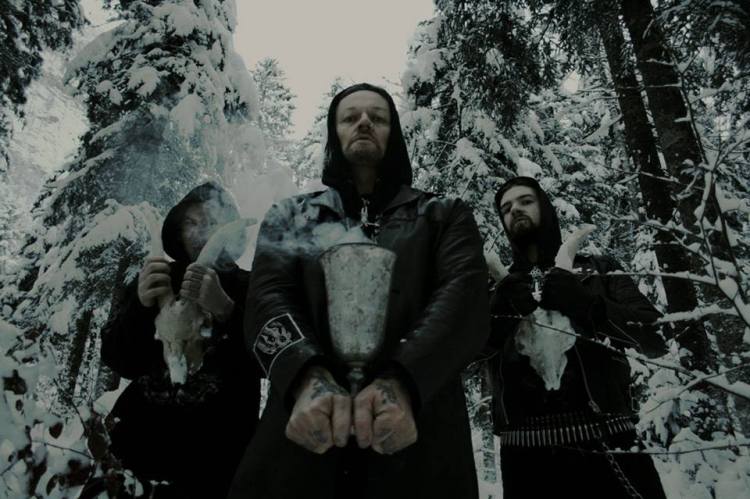 Rock Overdose: The artwork was once again created by Seth Siro Anton, who is also the singer/bassist of Septic Flesh. Do you like other greek metal bands?

ROTTING CHRIST are good friends of ours, we toured the USA years ago and still see and meet each other at festivals. Anyways, people that support BELPHEGOIR get what they deserve. The cover reflects the music, the title and verses in a perfect way, all representing as a whole unit,…and the Ritual vibe that goes throughout the whole offering, which is what we planned as we started this project XI.

First time we worked with Seth from Greece for PESTAPOKALYPSE VI album 2006, followed by CONJURING THE DEAD 2014, 8 years later and now we collaborated with him again. And it was the right decision, together we created a „cold - obscure homage to the dead“ artwork. You know death is everywhere, I was dead for 6 hours brought a lot of bizarre visions back from the twilight zone I was in at this time, I remember still it felt like months to me, so I guess I know what I'm talking about here.

Rock Overdose: Would you like to explain us the concept of the album title?

Helmuth Lehner: Some themes were collected from the book of the dead [Toth], and also from some magical talismans in the book "The key of Solomon" [Grand Grimoire]. Aleister Crowley's works have also been a source for some of the ritual and magical elements, also need to mention Friedrich Nietzsche. Some verses are deeply personal and self-centered. Besides we use a lot original poems/ chants etc and if u translate it in English sense would be defaced. I also dig it to sing in German language which we do since 1994 on each album, the perfect language to give people orders, with its harsh pronouncing and Latin as well has an own magnificent atmosphere, another BELPHEGOR trademark For "APOPHIS – BLACK DRAGON" we also added a 4th language, ancient Egyptian. I've been on vacation to Egypt three times. I've visited the Giza Pyramids [been inside one, impressive and magical, same as I stood on top of the Mexican Sun Pyramid], also traveled to Valley Of Kings, Karnak Temple, Luxor, the Museum in Cairo where I saw the mummified Tutankhamun and the golden mask and hundreds of other relicts, so I know what I'm talking about

Those archaic Egyptian and Latin chants inspired me to try and imitate the throat singing monks are known for, so the song got a more Ritualistic vibe, same as I did for our Death/ Black opera titled "EMBRACING A STAR". 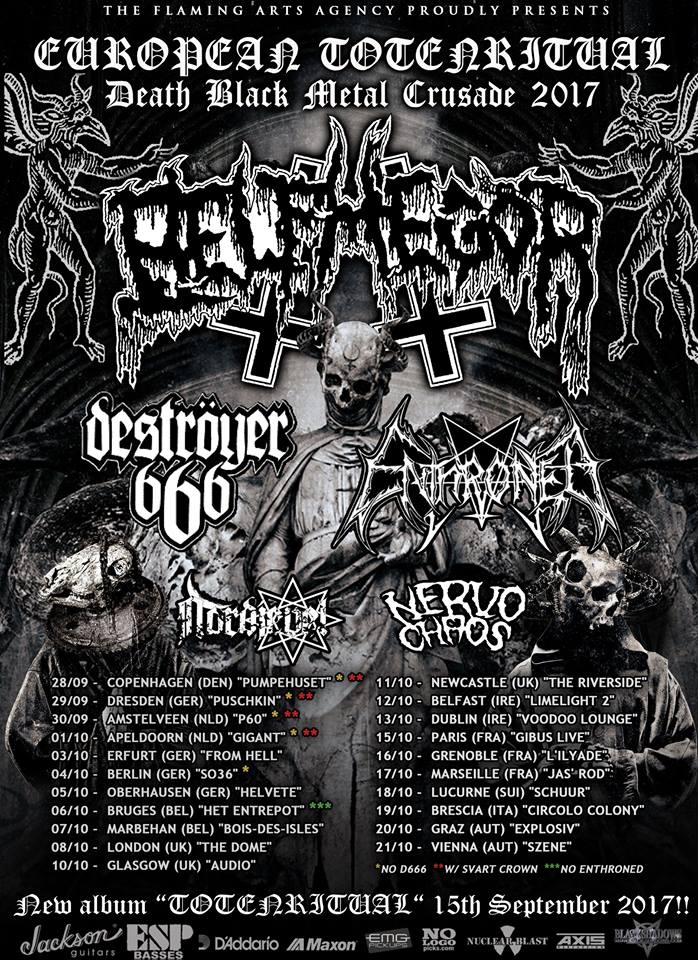 Rock Overdose: You have announced a European tour along with Destroyer 666, Enthroned, Nervochaos and Nordjevel. I have to admit that it’s a killer line up. What should the fans expect on this tour?

Helmuth Lehner: Yeah, it’s an outstanding brutal - obscure package and all dates are booked, a kinda “piss in the mainstream” Raid. Probably the most dangerous package in 2017 set to march through Europe. After that we return to North America for a 30 dates raid in Nov/ Dec.

You know, a BELPHEGOR concert nowadays is a Ritual. As soon as I feel the blood on my skin, I hear the intro, smell the incense, my mind switches to another zone of reality and I descend into another realm. I adore leaving my body for more than one hour during a BELPHEGOR stage performance, letting the demons take over and get into total possession with the music, it's a pleasure. I almost cum if the ceremony is great and the audience get crazy and wild, while glorifying. Often it is Magic between the band and the people, those are the most intense ceremonies, if you feel the sweat the obscurity – the blood,…than we are able and can fire our tracks with the uttermost ferocious intensity into the horde.

Rock Overdose: Unfortunately your shows in Greece were cancelled the previous year. Is there any possibility to visit us on this tour?

Helmuth Lehner: Yeah, a pity, and we couldn’t do anything about it. We were ready to go and return to Greece, and tried everything to save these two Rituals, but the promoter decided to cancel.

I hope we can came back 2018 with a different promoter and play Greece again, always a pleasure to shred over there and celebrate Death/ Black Metal with the Greek audience. Something important for the people I want to mention: The digipak version of the album comes with two bonus live tracks, both recorded in April this year at Inferno festival in Oslo, Norway with the titles "GASMASK TERROR" from the "CONJURING THE DEAD" LP and "STIGMA DIABOLICUM" from "BONDAGE GOAT ZOMBIE". 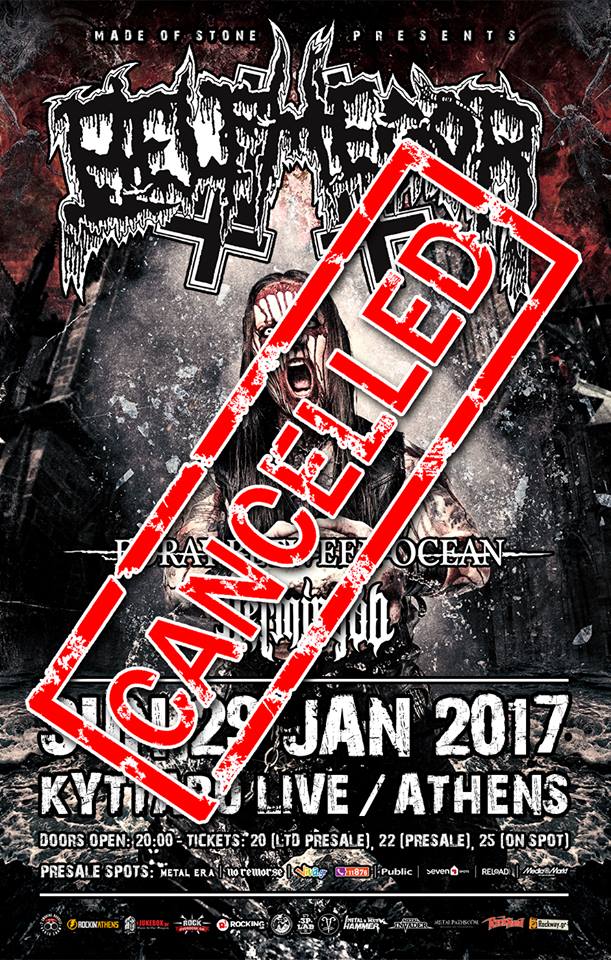 Rock Overdose: Thank you very much for this interview, it was a great honor. The last words are yours.

Helmuth Lehner: Thank you Konstantinos for the space in Rock Overdose magazine. Hails to all the demons who support us by listening to our sounds, attending our ceremonies, getting merch and spreading the plague!  Extreme Music is not here to calm you down, it must get the blood pumping, heart racing, provoke rebellion and perhaps shock the mind. This is what BELPHEGOR stands for. Hope people support us and get the new offering, titled “TOTENRITUAL”. Mark the 15th September in your calendar. Be prepared for this extreme Death/ Black Metal album. See you all hopefully 2018 in Greece again! Hail!!

For the Rock Overdose webzine,