JOHAN G. WINTHER: ‘As Above So Below’ music video premieres on Rock Overdose!

JOHAN G. WINTHER: 'As Above So Below' music video premieres on Rock Overdose!

JOHAN G WINTHER from Gothenburg,Sweden has released 7 albums with his extraordinary and terribly underrated rock band SCRAPS OF TAPE, 3 albums with
blackened hardcore band BLESSINGS and a stunning debut album with his new post
rock outfit BARRENS last March, which ended up in many year's end lists of 2020,
including #7 at Where Postrock Dwells' Top albums of the year.

'The Rupturing Sowle' is his solo album, which he recorded in voluntary pre-corona
isolation in a small cabin in the Swedish woods.
„I became a father for the first time in 2010, and anyone who has children can attest to
the fundamental life changes this brings with it. It forced me to re-evaluate myself down to
my core being and made me examine my life and my experiences more thoroughly“,
comments Winther on the motivational driving force behind the album.

„I started to dream parts of the same dream over and over, bits and pieces slowly coming
together into a narrative of sorts. In the summer of 2012, we retreated to our cabin in the
middle of Sweden and I started to record pieces to fit the narrative in my head. One of the core concepts were the inborn duality of the human soul, and I tried to represent this on the album by presenting as many ideas and musical parts as pairs, with a light and a dark side to try to create a persistent sense of tension throughout. Beautiful sounds mixed with ugly sounds, sadness mixed with joy, acoustic sounds and electronic sounds.“

This emotional duality and the diversity of sounds and moods that come with it are what define The Rupturing Sowle – just like in every good dish, where contrasting directions of flavour contradict and compliment one another in equal measure: the salty and the sweet the bitter and the spicy.
The cabin where Winther recorded almost everything on the album plays a pivotal role in the creation of a certain ambiance, a sense of place which is very present in these recordings. „

It’s the one place in this world where I can go and feel totally at home, where I am constantly inspired and at ease. Several tracks and layers were re-amped in the studio room, and I kept every creak of a chair or floor plank in the recordings. All these different sounds of both the cabin and the surrounding area were transformed in my mind to characters in the narrative. I recorded the open fire in the living room and the creaking
of the floating jetty down by the lake, birds singing and eerie sounds emanating from the forest in the middle of the night and wrote around them.“

While you listen and absorb the grandeur of these recordings, here are track-by-track
comments by Johan G. Winther himself, explaining the narrative of the album.

1. Outward Bound – A boat on a shore. The beckoning horizon…

2. As Above So Below – All is well, but slowly the sky and the sea starts to melt into one…

3. The Chastening Star – Things worsen. The relentless onslaught of the sun. There is no
escape…

4. The Drifting Boat / Drunk On Blood – Drifting aimlessly. So thirsty. What if…

5. Black Clouds – Black clouds fills the sky. The blood starts to ferment inside. So
nauseous…

6. The Rupturing Sowle - Something grows and grows grows inside. The pain is
unbearable…

7. Coiling Smoke – One black and one white plume of smoke rises from the boat,
disappearing away from each other in two directions…

8. Blacken The World – Finally, land again. But everything is different now. Chaos…

9. Evighetstonen – A great sadness sets in. Learn to live with it…

12. Tills Vi Inte Räds Förfärliga Tankar Längre – The white and the black smoke now caught
in a jar. To the old boat! The same shore, but different…

13. No Horizon – Now travelled far enough. The boat is still, jar in hand. Tired but content. I open the lid and inhale the smoke… 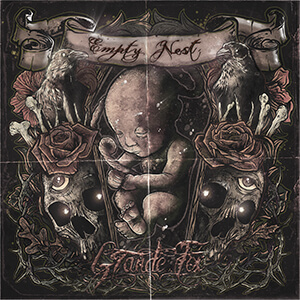