Lauri Ylönen (THE RASMUS) on Rock Overdose: “The concept of the album comes from the loneliness!”

On the occasion of their new single release, RockOverdose.gr  spoke with Lauri Ylönen, co-founder and frontman of the Finnish alternative rock band The Rasmus!

During the last pandemic-infused year, THE RASMUS has been busy recording its tenth album scheduled to be released  in 2022, with a worldwide tour for 2022 in support.

Lauri Ylönen (The Rasmus) : I'm doing great! Summer is here, we are ready for some gigs I hope so!

RockOverdose: Yes! After so many months, at last!

Lauri Ylönen (The Rasmus) : It's been very hard times for all of us but at least it's starting to go better. We have a show in Finland, in August and I'm really waiting for that! Getting on stage after so many months, it would be fun to come together again!

Lauri Ylönen (The Rasmus) : Yes. Actually I'm doing a lot of singing. I have a youtube channel, I do cover songs, live streaming with the fans and sing songs that are important in my life. I feel I'm going to keep up doing this cause if I stop I'm going to lose my mind. If I can't get to the tour, I'm going to start my little "shows" throught my youtube channel.

RockOverdose: It's been almost 4 years since your last album "Dark Matters"...

Lauri Ylönen (The Rasmus) : Yes,  4 years sounds like a lot of time but actually after its release we had very long tour around the world. Our last concert was before 1 year, in Mexico City, so it always takes us a lot of time to tour because we want to get interactive with the fans and also is very inspiring to write new material during the tour, because we get so much energy from meeting our fans. I've been writing a lot of new songs on the tour after the concert, I got inspired, take my quitar, go to the tour bus and keep writing. I always get inspired from our fans and the energy I get on the stage. That's the thing that keeps us going. We have some loyal fans waiting for us at the airport, outside the venues it's unbelievable, that's super!

RockOverdose: Would you like to tell us a few things about your new single "Bones"?

Lauri Ylönen (The Rasmus) : "Bones" was the first song we finished for our next album and it's about karma, in this case bad karma. I was thinking about karma and destiny during the last year when the corona - covid started hitting us really bad, and everything was uncertain, we didn't know how bad it really was and what's going to happen. I spend a lot of time with myself and with my thoughts, digging in my past life, what have I done in this life and what kind of effect it had to other people and how it's going to effect the future.

I think is very interesting and true, that whatever you do in this life it has some effect in something. I believe it made a nice song.

RockOverdose: Are you going to release a new single in the near future?

Lauri Ylönen (The Rasmus) : Not really in the near future, we are going to release something within this year and the album is coming early next year. So, we are working on some videos and other exciting things are happening this year , but I really can't say too much.

RockOverdose: Do you have the title of the album already?

Lauri Ylönen (The Rasmus) : Yes we have the title in very early stage, it's still a secret. It's nice to have the title and the concept of the album, and it comes from the loneliness. I was thinking about loneliness before the pandemic started, there are different types of loneliness. Some people suffer from it and others chose it as a lifestyle. I have a cousin living all by himself in a house into the woods, which for me is scary and creepy. He enjoys the silence, he likes to be there by himself and that's fascinating. So that's how I started to write the concept of the album and then with the covid situation I added some extra melangholic to it. That's how the album title was born. 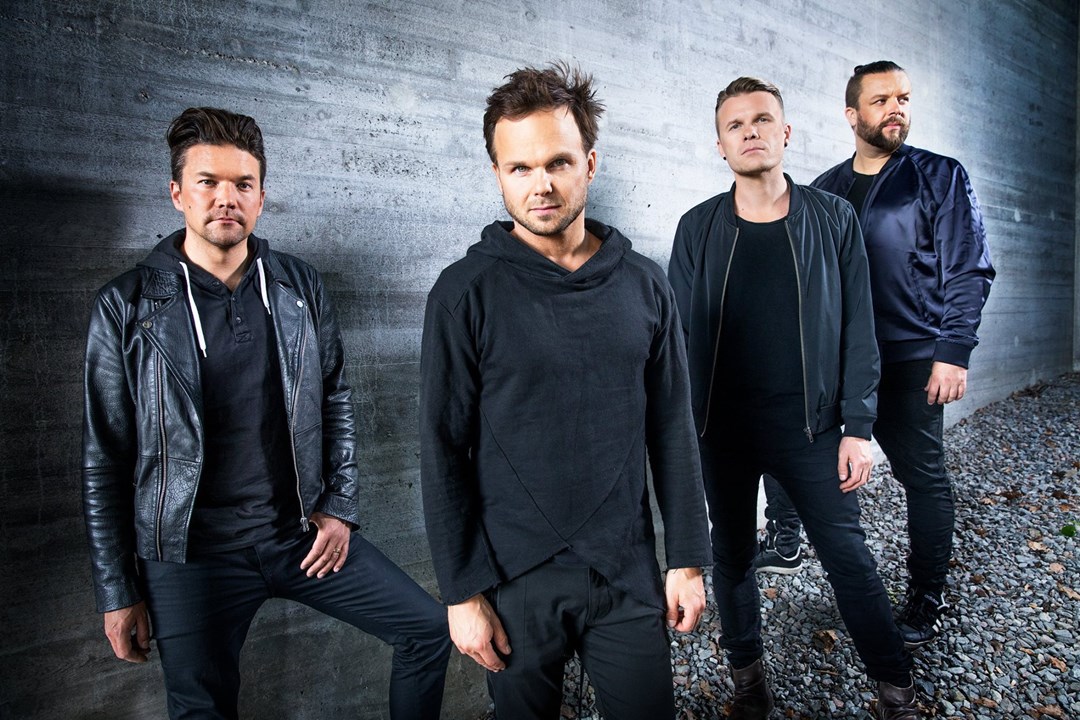 RockOverdose: What's the difference between the last and the new album?

Lauri Ylönen (The Rasmus) : The new album has more rock elements to it. In the last album we used more synthesizers, electronic vibes. This album is more rock and the songs remind us of Dead Letters  an  Hide from the Sun, the albums we did back in 2003, 2005. However, as always they have the Rasmus DNA, you know... if you hear a little bit of the song, is easy to recognise that's a Rasmus song. It's actually quite narrow the sector that we're going, that's maybe something that comes from the roots of being in Finland, the traditional music we used to hear as kids, from our parents. This became my musical identity, when I write I always write out of that kind of box, in different way or type of production to make it sound different, but the roots are the same.

RockOverdose: You have made a lot of success with the singles "In the shadows", "Living in a world without you", which have also reached #1 in the greek IFPI airplay charts and of course in other countries. Do you believe that you can make another hit nowdays?

Lauri Ylönen (The Rasmus) : It's imposible to say, especially while writing the songs. There are so many things that need to go right in order to have these epic songs. I think it was just the timing, it was perfect for that kind of song like e.g. In the shadows...

There are so many things that can make a hit. You don't have to think it too much. You just have to write something that means to yourself and that's the best thing you can do. Like in this album, I write about things that have a meaning for me. Every song has a reason, it's not some random story. It's very important for me cause I'm the one that's going to sing that on stage.

RockOverdose: So, it's kind of difficult to predict a hit song. Maybe there's a song you don't believe it would become a hit, and it becomes.

Lauri Ylönen (The Rasmus) : Yes, exactly. I'm so close to my songs but I can never predict which song could be a hit. I might fall in love with a line, I don't see the big picture and it's a very nice momment when you release an album and then after a couple of months you can see that people listen to a song a lot. It's really hard to pick just one song. So many people pick different favorites, and that's also a good sign and this is also pretty good for the quality of the songs. That's what we always try to do with The Rasmus, we spend quite many years to make a next album and  collect the best songs we have to make a nice album,working on its concept, instead of making random singles.

Lauri Ylönen (The Rasmus) : I remember playing there many times, in Athens under the Acropolis, we had this concert in 2010 maybe. It was such a beautiful momment, the atmosphere was perfect outside under the stars, I remember playing the song "Living In A World Without You" and everyone was jumping, singing that song. It was incredible!

I love Greece, I've been there for holidays many times and I actually got inspired for our album "Black Roses", we have booked a villa at Folegandros island, and it was amazing. We were there for 2 weeks, writing songs, it's a small islands with so many chapels, churches, really amazing and inspiring! I love this relaxed feeling...

RockOverdose: I wish you to visit Greece again soon!

Lauri Ylönen (The Rasmus) :Thank you!

Lauri Ylönen (The Rasmus) : As I mention before I have these "Bedroom sessions" - live videos on my youtube channel, trying to keep in touch with our fans, and it's mentally good for me because it's really hard not to play in concerts and get in touch with the people. I do covers of songs that inspire me, from Beattles to Slayer.. All kind of songs! Every Sunday I release a new song there, check it out!