Stefan Schmidt (VAN CANTO) on RockOverdose: “At least music can still bring people together, that’s what we try!”

RockOverdose had the chance to speak with Stefan Schmidt of VAN CANTO, on their brand new album “To the Power of Eight”, released on June 4th via Napalm Records.

This is the 8th album of the german a cappella metal band, that includes both great original music and of course covers.

Get the new album "To The Power Of Eight" here: https://smarturl.it/ToThePowerOfEight

Stefan Schmidt (VAN CANTO): I’m good! Thanks for having me!

RockOverdose: On 4th of June you release your new album “To the power of Eight”, would you like to tell us a few things about it?

Stefan Schmidt (VAN CANTO): Sure! It’s our 8th album, there are  12 songs on it, 8 originals from Van Canto and 4 covers of other bands. The great thing with this album is that  we are with 8 musicians, our former lead singer joined us  as a guest vocalist.

RockOverdose: What about the covers?

Stefan Schmidt (VAN CANTO): We have “Run To The Hills” – Iron Maiden, “Raise Your Horns” - Amon Amarth, AC/DC’s “Thunderstruck” and “I Want It All” from Queen. It’s a good mixture of different styles and also fits very well with the constellation of the album.  Of course we love the originals otherwise we wouldn’t be able to cover them and it was fun doing it!

RockOverdose: Which song is your favorite from the album?

Stefan Schmidt (VAN CANTO): It depends on the day actually! For example, today I listened to “I Want It All”, the original with Freddie singing is nothing you can do better actually, so we focused on the duel between the lead singer and the guitar player, which for us also a vocalist! 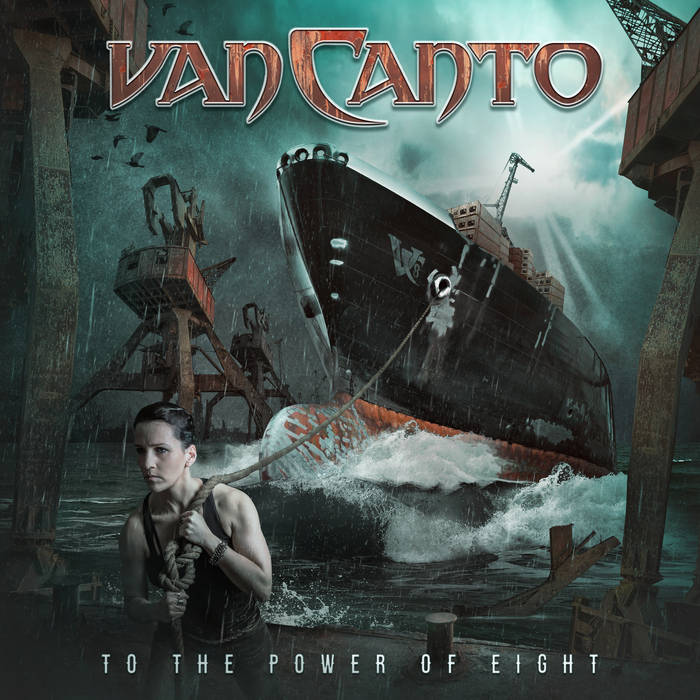 RockOverdose: What about the other songs, the original VAN CANTO songs of the album?

Stefan Schmidt (VAN CANTO): As always we try to have twice as much original songs as covers. That’s  also the case for  this album and I thing we have a broad range to get a full picture,  from ballads like “Turn Back Time”, to more up tempo songs like “Dead By The Night” or “Faith Focus Finish”, some of hard rock style with “Hardrock Padlock”, modern songs like “Heads Up High”…so we tried to give a good mixture of our song writing and also to focus on the sweet spots of the lead singers.

RockOverdose: What about the lyrics and the theme of the album, is there any specific concept?

Stefan Schmidt (VAN CANTO): As always, VAN CANTO write songs about motivation, positive thinking, so we don’t have deeper message, e.g. political message or anything. We really want our listener to have a good time. What we tried to achieve is to feel better when they hear to our music, because they feel like their old hero, that’s why we call a metal hero, that’s basically the meaning of our lyrics.

RockOverdose: What about the RAKATAKA vocals that you use? What’s the meaning of this?

Stefan Schmidt (VAN CANTO): In the beginning of VAN CANTO the syllabus RAKATAKA was the style that we tried to immitate the guitars… “Rakataka! Rakataka!” and so on… Over the years, after 15 years now, of course we tried a lot of things, RAKATAKA may not be the perfect syllabus but it would be more complicated for our fans if we renamed the style of every album, so we still call that way of singing like this, “rakataka vocals”!

Stefan Schmidt (VAN CANTO): Exactly and it would be very stupid to change that.

RockOverdose: What was the idea behind forming the band and the acapella versions of the songs?

Stefan Schmidt (VAN CANTO): There wasn’t a masterplan. At the very beginning we just wanted to do something vocal oriented, to form a metal band with more than one lead singer, with lots of backing vocals. The more we tried at the studio, the more vocals we recorded, the more we thought it was a good idea to leave the instruments out, completely, apart from the drums of course. That’s how we recorded for the first album which turned out to be a full metal acapella album. And since then, it’s been a crazy ride we didn’t expected to come that far. It was planned as a project and it turned into a band, which now is a major part of our lives for the last 15 years!

RockOverdose: I suppose you are planning to promote the album by touring, if the conditions let it happen…

Stefan Schmidt (VAN CANTO): Yeah! We made the decision to not wait for the album release until a tour can be done. This is the first time that we release an album without tour dates being already set! But we thought it feels better for us to release a complete album when it’s still fresh in our minds, I mean if we release it one year later perhaps we won’t have the same relation to the song writing anymore and these phone interviews we have to do. So this year we are focused on the album release and its promotion, with videos etc and hopefully next summer we are going to get on the metal feeling with live festivals!

Stefan Schmidt (VAN CANTO): My personal memories from Greece are unfortunately not related with any live appearance there, until now we haven’t made it to play on a festival or show there! So I have only visited Greece for holidays, especially as a teenager. But from the feedback that we get, from fans all over the world, from comments on our videos etc is that the complete south Europe, including Greece is very warm and follow VAN CANTO through the years. I’d love to meet all the greek fans in a live situation.

RockOverdose: Maybe the time has come to visit our country…

Stefan Schmidt (VAN CANTO): Yeah! Maybe. Currently there’s no tour planning. We’ve booked some festivals in 2020 they were postponed for 2021 and now they are postponed again for 2022. So I think the best idea is to wait until something can happen again.

RockOverdose: Great! So what are your next plans with the band or any other news you’d like to share!

Stefan Schmidt (VAN CANTO): After the release of the album we will have another video single coming out and of course doing a lot of interviews, which are really fun and exciting this time to see how many different people around the world are interested in VAN CANTO. It’s an honour for us. We are now packed with the promotion of our new album.

RockOverdose: Your album is released via Napalm Records. How has your cooperation evolved all these years?

Stefan Schmidt (VAN CANTO): They contacted us at the very start of our career. We had a contract with another label back then and after they closed, Napalm was the first to contact us again in 2009 for our album “Hero”. It’s a very fruitful cooperation, with now the fifth album that we are releasing together. they also proved bigger throughout the years, so apart from this growth we did together it always feels good to come.

Please send a message to our readers and listeners!

Stefan Schmidt (VAN CANTO): First of all, I’m very thankful for all those that are interested in VAN CANTO or metal acapella. These days are so many obstacles in life, in political situations and I believe that at least music can still bring people together, that’s what we also try although we have a different approach on how heavy metal is performed. We are all metalheads from the inside. Thanks for listening to VAN CANTO and stay safe.

RockOverdose: Thank you very much for this interview and wish soon to see you live!

Stefan Schmidt (VAN CANTO): Same here! Fingers crossed! All the best to you!