As part of the promoting their new album, Jomsviking, Swedish epic death metal band, Amon Amarth, Rock Overdose had the pleasure and the honor to interview the band's bassist Ted Lundström. Enjoy him in an interview about everything concerning their past, present and future.

Rock Overdose: Greetings, we are very happy for this interview as it’s always a pleasure for us to speak with you, a descendant of Óðinn. How were things between Deceiver Of The Gods and Jomsviking? Were you touring a lot or thought that you should focus on the new album?

Ted: We had about two years of touring from the release day of Deceiver of the Gods until we decided to take a break to write the new album. We did write some of the riffs on tour but most of it was written after we stopped touring.

Rock Overdose: Could you tell us more about this new album? I know that Jomsvikings were a legendary order of Viking mercenaries compared to Christian knightly orders. So would it be safe to assume that the whole album covers up their stories and fights?

Rock Overdose: From what we’ve already heard from your first two Video Clips you have made a more melodic approach to your arrangements. So is this going to be a more Heavy Metal rather than Death Metal album? Moreover, I got the feeling that vocals in these two songs are more brutal than in Deceiver Of The Gods.

Ted: We definitely had to go more melodic and more heavy metal on this album since we had a story to follow. We worked really hard to find the right atmosphere for each song. But we do not want to let go of our death metal roots so we worked a lot to make the vocals as aggressive as possible.

Rock Overdose: In the song A Dream That Cannot Be you’ve had Doro Pesch as a guest. How was this experience, having a metal legend work with you? Are there any other artists that you’d like collaborate or be featured in your albums?

Ted: We are super happy to have Doro on the album and I think she did an awesome job with her part of the song. She came to the studio and stayed for two days and we had a blast. It is great to be on a level where we can actually work with people we have as our own idols. There are a lot of people that would be cool to collaborate with but we don’t start by thinking about who we want and then write a song, we start with a song and then we think about who would make this song better.

Rock Overdose: Now to the hot question everyone was talking about a few months ago and maybe still. You parted ways with Fredrik Andersson in 2015. Was this something that both sides agreed on? Have you found a permanent drummer and how this affected the recordings and the composition of the new album? For me personally the sound of drums is definitely not the same, not that I don’t like it.

Ted: We decided that we had to go separate ways for the best of the band. It is never easy to separate after a long time together but I think we found a perfect guy to fill in on the drums. Tobias Gustavsson did an awesome job helping us write and record the new album so we were never worried. Unfortunately Tobias was not able to continue and tour with us so we have a new guy behind the kit now, Jocke Wallgren from Valkyrja/October Tide. 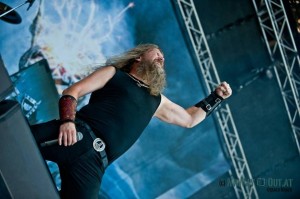 Rock Overdose: Johan took part in the movie Northmen – A Viking Saga. You also made a mini movie-long clip about Father Of The Wolf. Have you ever considered in making the soundtrack for a movie, or creating your own movie about one of your present or future albums?

Ted: We would not mind doing something like that in the future, maybe this is a first step in that direction, who knows. I like the idea to take the music to different areas like movies and art. We worked with a bunch of graphic artists on this album to create one design for each song, for example.

Rock Overdose: Through your music you’ve inspired many fans to start their own Viking themed bands or explore deeper Norse Mythology and history. Had it ever crossed your mind back in your early years that one day you would bring knowledge, along with other bands of metal only with your music?

Ted: When we started we never thought about this, but we realize that we are spreading the interest of history and mythology all over the world nowdays. It is a good feeling. We actually started the Viking style in the band because we wanted to know more about our own history and religion, we thought that you did not learn enough about it in school. 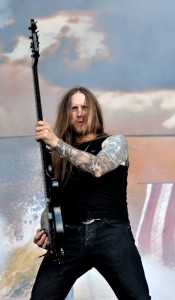 Rock Overdose: I know that it’s too early, back are there any plans for a future album? And what does the future hold for Amon Amarth?

Ted: Right now we have no specific plans for a new album, we will start touring for this album first. Usually, somewhere on the road, we will plant a seed that will become the next album. We might get an idea about what direction we want to go and then start from there.

Rock Overdose: How did this whole Viking style affected your everyday lives? Were you so much into the Sagas and history before the band or it was something that came along with the research for every new album?

Ted: Me and Johan Hegg have always been interested in the mythology and we were before the band started to take this direction too, but of course we have had to research more to find stuff to write about album after album.

Rock Overdose: We, fans in Greece are not disappointed as we get the chance to see you live quite often. Should we await you again in your next European tour? Thank you for your time and close this interview as you’d like.

Ted: You can be sure that we will include Greece on the next European tour. It is still in the planning right now but we will release the dates as soon as we have a tour booked. Make sure to check our Homepage and Facebook for the latest news about the band and tours.
Cheers! Ted