Andy Cairns (THERAPY?) on Rock Overdose: “We are going into the studio in January to record the new album”

We are very honored to present you the interview that Andy Cairns from Therapy? gave to Rock Overdose and to Konstantinos Sotirelis. Enjoy!

Rock Overdose: Hello Andy, welcome to Rock Overdose. How it’s going on the band’s side these days?

Andy:  Hi Konstantinos, great to talk to you and thanks for the questions. Everything is good in the Therapy? camp at the minute. We’re currently rehearsing for our fifteenth album, a follow up to 2015’s ‘Disquiet’ and we’ve been very busy. The mood is up and we’re enjoying being in the band and touring more than ever.

Rock Overdose: A few days ago, and to be exact on 2nd of November, it was the 25th anniversary of the “Nurse” album. What are your feelings and memories from this album?

Andy:  I have mixed feelings towards the album. It was our first album on a major label and, at the time, we were very self conscious about making sure we weren’t mistaken for a grunge band and took great lengths to ensure we had all our influences on display from punk, metal, rhythm and hip hop beats. Some of the songs are fantastic, ‘Teethgrinder’, ‘Disgracelands’, ‘Accelerator’ and ‘Nausea’ others are not so good. I’m not happy with the sound of the record either. It took most of the recording session to record the drums and just a few days for all the bass, guitars and vocals. Consequently the guitars sound a bit thin and the vocal performances could have been better. Having said that, a lot of Therapy? fans love the record and when we play tunes off it live the crowd goes crazy. Recording g it was a good education for us and any of the mistakes we made taught us better methods when it came to our next album, “Troublegum”.

Rock Overdose: On 21st of August you released a double acoustic live CD called “Communion: Live At The Union Chapel”. What’s the feedback so far?

Andy:  Released the cd through our website and live shows only. We wanted fans to have a souvenir of the acoustic gigs we had been doing and didn’t want to give it a ‘proper’ release as we didn’t want people thinking it was a new Therapy? album with new material. The reaction has been magnificent with a lot of people saying they really enjoy hearing the melodies and lyrics in such a stripped down way. 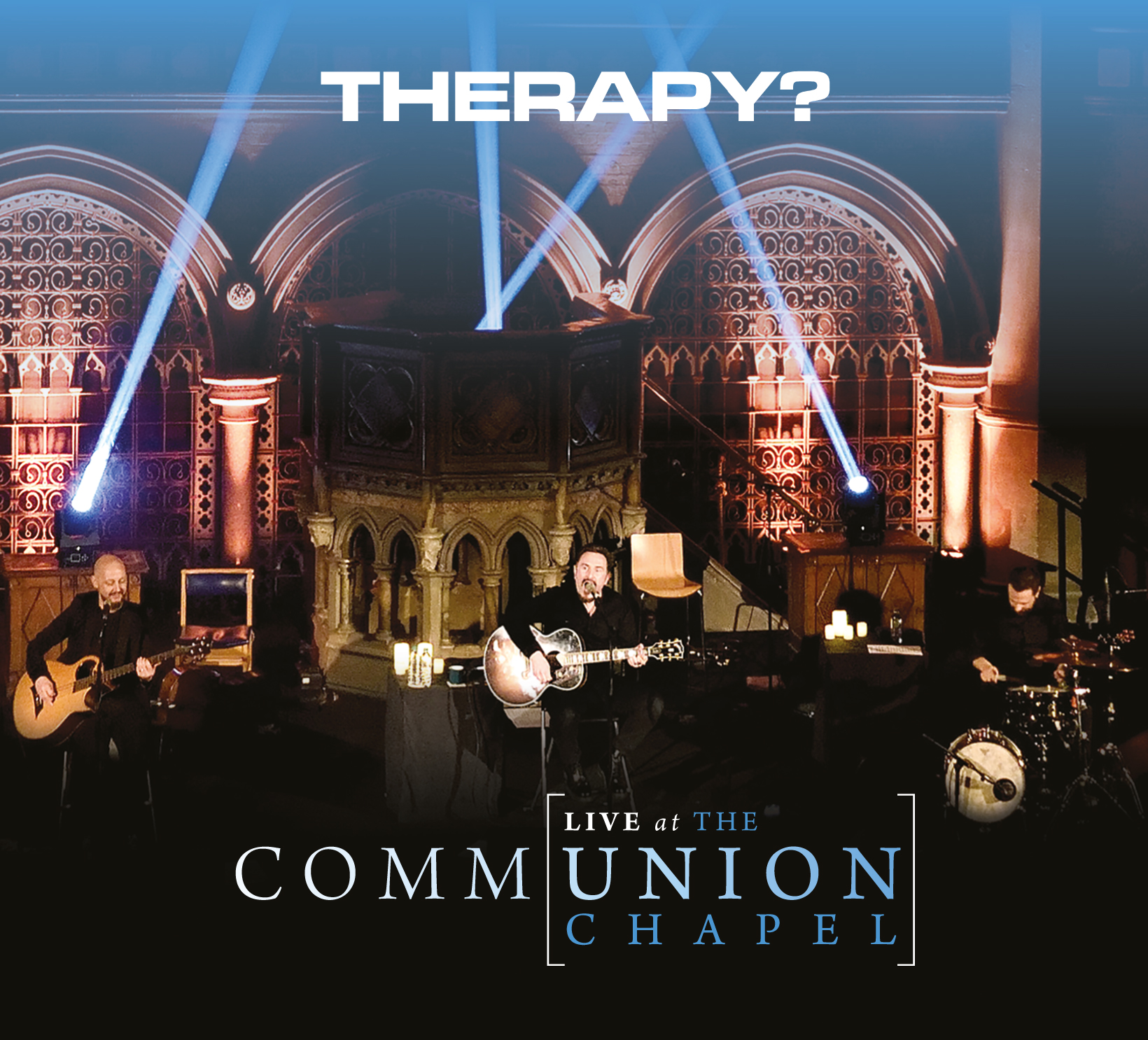 Rock Overdose: How and when did the idea of the acoustic show come up and why did you decide to record it?

Andy: In 2014 the other two guys in the band were busy with very young families and we had taken some time off. I got bored and asked my booking agent had he any ideas and he suggested some solo acoustic shows around Belgium and Holland. They went very well and people enjoyed not only the songs but the talking and stories in between them. Tales of how the albums were recorded, partying etc. We then decided we would try touring acoustically with the band and it really worked. It’s not the same thing as a full electric show with volume and high energy but for hardcore Therapy? fans it’s a chance to see their favourite band in an intimate setting playing some of their favourite songs in a different style. The success of the shows meant that some fans started requesting tracks from the gigs to be released so we started recording the shows and had enough material for an eventual CD and download.

Rock Overdose: In a few days you are going to visit Greece once again. What are your feelings and what should the fans expect from this show? Will there be any surprises?

Andy: We’re incredibly excited about returning to Gagarin, Athens in Greece. It’s one of our favourite venues in one of our favourite cities and it’s been a while since we played. We always enjoy playing in Greece and as good Irishmen we can connect with the passion of the people! We shall be playing a party set so there be A LOT of favourite tracks from “Nurse”, “Troublegum” and “Infernal Love” but we’ll also play some recent material and maybe some old stuff from very early 90’s. We intend to enjoy our stay in wonderful Athens as much as possible.

Rock Overdose: A year ago, you visited Chania for the Chania Rock Festival. What memories did you derive from this show?

Andy: Chania was an incredible experience. What a venue and what a beautiful part of the island. We had Greek fans there as well as people who had travelled from Ireland, Germany, Turkey and even Finland to party with us and listen to lots of good music. Rotting Christ were completely amazing that night, they blew my mind. Good location, good people, good times. A perfect festival.

Rock Overdose: “Disquiet” was released two years ago. Now, when you listen to that album again, what feelings are coming up?

Andy:  I’m very proud of “Disquiet”. Some of the songs on that record ‘Still Hurts’, ‘Tides’, ‘Deathstimate’ and ‘Insecurity’ is some of the best material we have recorded in years and feels so good to play live. Our fans have been amazing in giving us positive feedback about it and the album managed to get well received all over the world. I think it’s got the right mix of melody, riffs and rhythm tied to dark and twisted subject matter in the lyrics.

Rock Overdose: After more than 25 years, what has changed on the band’s music and mentality in your opinion?

Andy:  Musically? I think we are always learning and still listen to a lot of new music. We are wise enough to know what influences to take from modern music and use it to our advantage without sounding like a bunch of old guys trying to be fashionable! We still live rehearsing, recording and touring and always get a kick out of live performances. Over the years we have come to appreciate what we have is special, not a lot of bands stick around for this amount of time and stay friends so we’re very grateful to have the friends and fans we have. There is no pressure on us anymore like there was in the 90’s, no record companies demanding hits and radio play. Our last record was released by the great Amazing Records in the U.K. who just let us get on with the music. 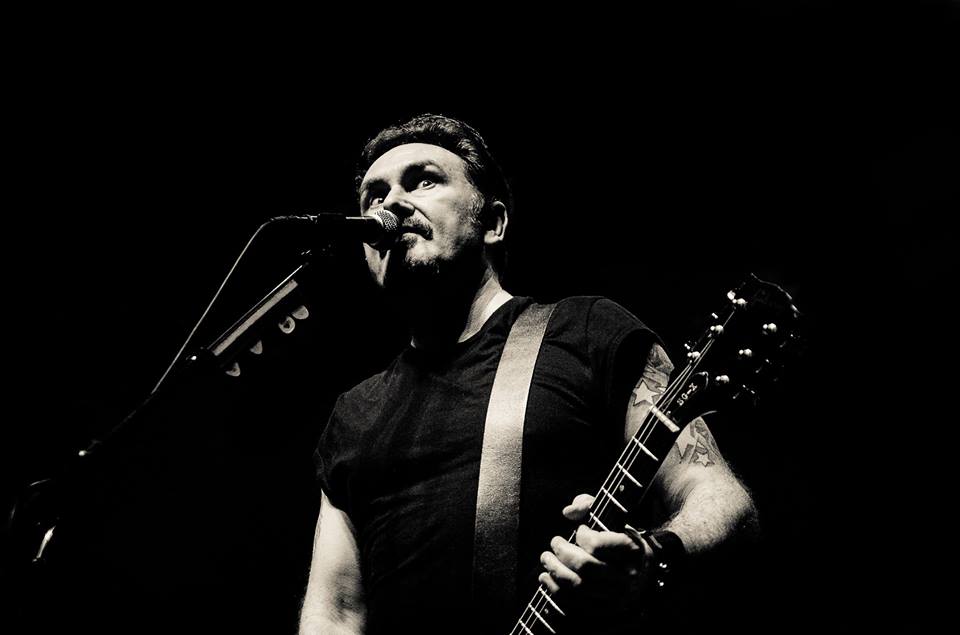 Rock Overdose: Are there any plans for a new album?

Andy:  Yes! Songs are written and we’re going in to the studio in January. We hope to see the album released in April/May 2018.

Rock Overdose: Thank you very much for this interview. The last words are yours.

Andy: Thank you, Konstantinos. I’d just like to say, on behalf of Therapy?, a big thank you to all our friends in Greece who keep bringing us back to play for you. We have so many great memories of times there in the past and we’re looking forward to making new ones at the Gagarin when we return. Hope to see you all there.